Turn On Your Brain with iMusic from “Volition Thought House” 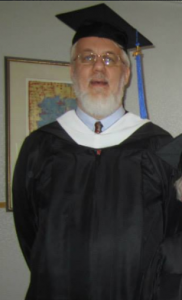 In 2013, I completed my Masters of Arts in Jewish Studies (MAJS) from Hebrew College in Boston.  This degree was totally for personal development, I was not seeking a job from it.

I began at Hebrew College by taking the Hebrew III and IV classes in 2005 and 2006.  I had studied some Hebrew, but wanted to take it to the next level.   I had already developed my own “At Home With Hebrew” software program for teaching the Hebrew alphabet.  After completing those classes, I was familiar with the new school and how to participate in the interactive online classes.

When I saw some of the classes the were being offered in the Masters program, I was intrigued and signed up for Introduction to Talmud.  Even though i signed up for credit, I wasn’t necessarily planning on the degree at that time.  At that time, I didn’t know it was a more advanced “text” course, but I managed and got my first “A”.

I took more and more courses (14 hours) until they asked me when I was going to apply, and that non-program students were basically limited to how many courses the could or should take.  I had been procrastinating with the application process, which required writing a couple of short essays, and getting transcripts from my previous three colleges.

I recently reminded a friend that I started in 2005 and graduated in 2013.  He seemed surprised that I had been involved in the classes such a long period of time.  It reminds me of an old story, about an older person saying “I can’t go to college, I’ll be 50 years 4 from now”.  Then someone asked them how old they would be in 4 years if they didn’t go to college.”

For my graduate seminar/paper, I wrote about “The Challenge of David and Goliath”, a study of the text of I Sam 17, and focused on why the Septuagint (LXX) Greek text differed so dramatically from the Hebrew text, more so than any other passage in the entire scriptures.  Search YouTube, I’ll probably have the video there soon.

The program is flexible for the adult student who is working full time.  I actually was a software consultant working in Colorado Springs, Santa Fe, San Francisco, and Boston while taking classes.  Fortunately, while in Boston I was able to attend two on-site classes.

I highly recommended the classes and at Hebrew College.  The professors are extremely knowledgeable and friendly, and even on a first name basis with the students.  If only they had a PhD program!